This show ended up with more of a novelty-song focus than I’d intended, but I guess it’s all based on which records I bring, so I can’t really dodge the blamethrower…!

Standouts include the Sa-Ra MMW remix, the O’Jay’s glimpse into the future & Chic’s “Happy Man,” which will be stuck in your head for days afterward (if you’re lucky!). Also, a begrudging commendation to Chevy Chase for being an early-enough-adopter to recognize that hip-hop music was a significant enough musical trend to merit parody. (Even if his parody is on the lamer side—basically, almost on par with any given wack rap song from that era…)

This show represents everything I try to do with the Revolutionary Plastics Hour. It’s got some cool newer music (the triumphant Glass Candy opener & the bouncy Shafiq Husayn ear-candy), then some lesser-known tracks by artists that may or may not be familiar to the average listener (that second 3rd Bass song is truly embarrassing, though; I just wanted to play it for posterity).

Then, a lovely setup/payoff, courtesy of Don Rickles & Robert Goulet, followed by another one-two punch, this time focusing on egregious song-ripoffery (the imitator comes first, then the originator). After that, a really fun, catchy country-pop tune & some in-studio bickering by the group who brought you “Wild Thing.” The evening concludes with a bittersweet rendition of “September Song,” by the man who was born to put the “awwww” in “maudlin,” Jimmy Durante.

All in all, a great example of what this show should provide & embody. Hope you like it…!

This episode centers around story songs. I’ve always appreciated the way a song can tell a story, whether as a broad-strokes character sketch (“Martin,” “Loyola,” “Kiss the Bottle”), an anecdotal glimpse (“Smithers-Jones,” “Shut Your Little Trap, Inc.,” “Kiss the Bottle”) or as a full-fledged short-story that happens to fit into the conventional structure of a pop song (“Fancy,” “No Regrets,” “Home Sweet Home,” & the rest, basically).

I hope you get to check these songs out on a drive or on a jog, or something; any context where you can hear the lyrics & get a sense of what the songwriter’s doing with his/her protagonist(s). These are the songs that come to mind whenever I hear someone singing a song about how they feel. There’s been quite enough of those songs, thank you. More songs about people who don’t write songs, please!

Oh—I’d be remiss if I didn’t mention that the show concludes with the most brilliantly-written song ever written, “The Ballad of the Shape of Things.” Check out the lyrics. (I just got a chill re-reading them!) Up yours, Dashboard Confessional!*

This one’s got some of my favorite songs ever; the Finger one’s just brilliant—keeps you waiting the whole time for the chorus, then hammers it. The Saul Williams one is pretty powerful, too—& Bernadette Peters’ version of the Elvis classic is intensely intimate. Or intimately intense. Either way, it’s sweet.

There’s also Mr. Rogers, with his classic “alternate version” of “Row Your Boat,” & UiLab (which is Ui, Sasha Frere-Jones’ old band, teamed with Stereolab, forming a math-pop indie kid’s wet dream) doing an Eno song, an unearthed gem by an Italo-disco legend (courtesy of the stellar Italians Do It Better label) & a fully-accredited (Casablanca Records, yo) disco version of an early Shakespeare banger.

Then, the host of Hollywood Squares (Eighties version) takes on Simon & Garfunkel, followed by a dynamite a old-school Stevie Wonder track, from his lesser-known album, Where I’m Coming From (1971), the first step on his streak of untouchable perfection that lasted through 1980, with his stellar Hotter Than July. (We’ll leave that Plants album out, as the exception that proves the rule.)

Episode Ten coming at you!

Right-click the Download link to save to your machine!

Yet another mid-week missive; a tale told by an idiot, full of sound & fury & what not, signifying monkeyshines.

This week’s episode features music by Sa-Ra Creative Partners, a spectacularly upbeat & catchy number by the Glass Bottle, a song by Graduate (UK power pop by pre-Tears for Fears blokes!), an eighties(ish) novelty block, & then we get real, real French for a change, with the scowly Jacques Brel & the delightful Francois Hardy.

We conclude with some dialogue between Antony Perkins & Melina Mercouri, which includes a bit of sweetly melancholic singing, preceding a manic monologue that, unfortunately, cuts off just before Perkins drives over a cliff. (Yes.)

Overall, I’m pretty happy with this show; no glaring screwups, apart from a couple of slack segues. I tried to keep the chatterboxery down this time, but it still got the better of me here & there. But really, it’s a journey, not a destination, right? Hey, man.

Right-click the Download link below to save this magic to your machine!

The “awkward” second show. Not exceptionally polished, but I think it rises above “sophomore slump” territory, anyhow. I wasn’t fully consistent with the show’s current 100% vinyl policy (most of my records were still packed up in storage at the time), but I was able to get to 50%, at least.

Some slow-paced favorites here, around the middle set. Label namedropping: Tri Angle, Italians Do It Better. So far, these have both utterly failed to disappoint, across the board.

Full disclosure: There’s more talking on this one than there should be; I chalk it up to new-radio-show giddiness. These days, I’m less chatty.

Arcadia – The Promise (instro)
Battles – Tras
Peter Brown – Overnight Sensation (12″ version)
Sherbs – Juliet & Me
Caress – Just Like in the Movies
–
Indeep – When Boys Talk
Gayngs – The Walker
Desire – Under Your Spell
oOoOO – Burnout Eyes
–
Tiedye – Nothing Else Matters
Bernie Schwartz – Round & Round
Robert A. A. Lowe – Gyromancy

Welcome to Episode One.* It went much better than I had any right to expect, given how long it had been since my last radio show (college) & my still-shaky familiarity with the gadgetry.

A really fun handful of songs to get rolling with, though, so that’s a start…!

The Revolutionary Plastics Hour: Volume One

Right-click the Download link to save to your machine! 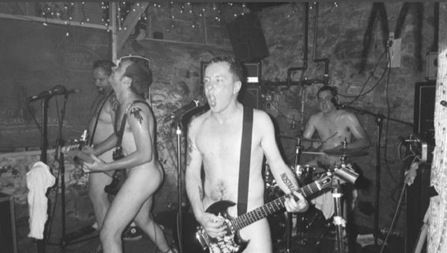 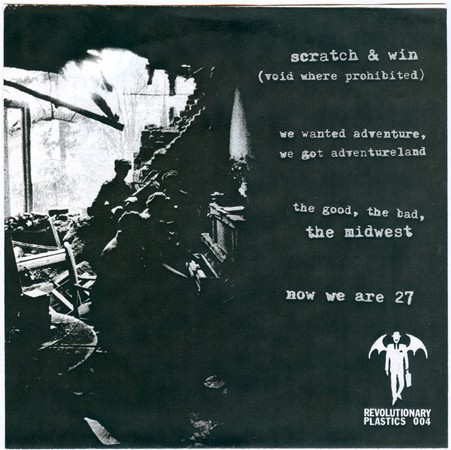 Chopped & screwed by xdonricklesx off the original yellow vinyl, yo.

Thanks to V/VM; I was going to do this anyway, but his version gave me confidence that it was all going to turn out okay.

This is a song featuring Lou Reed, before he got better known & did that album with Metallica.